Trying to get it out

I have several posts in mind, mostly I seem to stumble over whatever I want to write, it's just not coming out the way I want it to. So, I'll just blurt it out, and see what the hell happens next, ok?

In December, we thought Julius wasn't speaking because his throat was raw from reflux and he needed more meds, and he did improve and said a few things more clearly once he got more, but then....something happened. And he got quieter and quieter, and one day, Mr.C turns to me and says, I think he's deaf. And we realized that he never turned around for noise behind him, ever. If we clapped very loudly and close, the reverberations might make him turn, but nothing else. I thought maybe it was earwax or fluid clogging up his ears, but the pediatrician kept saying it wasn't possible.

Everyone actually, just kept saying it wasn't possible. The said that earwax and fluid could never ever clog up a kids ears, that I must just be ignoring him, not speaking to him, that he must have some sort of developmental delay and I was making it worse. Daycare and speech therapy was the answer. Definitely not being near me, because after all, if he wasn't developing perfectly, it had to be his mothers fault.

The 8 minutes or so with limited oxygen? The amount of time he spent with no oxygen, completely unresponsive, no pulse, no nothing? The long family history of language, learning, and speech problems? Nope, all irrelevant, in the face of what we all know, is always to blame, bad mothers.

No one blames fathers, or doctors, or genetics, or crappy non-existent medical research, or just plain, old, bad luck. Nope, it's all of us shitty moms. Some of us even start to believe it, and think it might be true, and that maybe it's divine justice, taking revenge on us for risking pregnancy and birth another baby with our really bad medical history.

I pressed on, in the face of all that guilt and blame. I got a hearing test, and a referral to an ENT, and I went to a psychologist, and a speech therapist, and I put up with more blame and more decrees that daycare would "cure" his obvious neglect. At the first hearing test the audiologist did a basic test, and declared him fine. But I have no idea what on earth she was measuring because by the time we went to the ENT, he had a giant wax plug in one ear. So large, and so awful that my husband had to hold him completely still while surgical implements were used to pull it out.

The 2 hearing tests in a row after that were still showing loads of fluid so his hearing was muffled, likely with gluey fluid that most Docs can't see on sight, but hearing tests can detect easily. Yet for some reason, the ENT did not tell us the truth. He told us to relax, just come back in 6 months.

I learned long ago that if a Doctor tells me to relax, and I do it, I end up burying a child, or deathly ill. Never ever relax is my motto. I insisted on one more hearing test referral.

So while I suffered more insults and paid more money to speech therapists and psychologists and listened to more discussions of how daycare would cure everything, we had a flood. A giant flood. And we called in the insurance company who wasn't going to cover anything, until I called in a contractor and started pulling up the now moldy subfloors, and gee whiz. There was an open overflowing drain under the subfloor. Our drains were blocked by tree roots and all sorts of strange items, and over the last many years, the water had spread mold. Black mold. Did you know that Black mold causes sinus problems, and glue ear and tinnitus, and allergies and sometimes, excessive earwax in dehydrated kids?

So, one insurance claim later and several thousand dollars later, we have a ripped up basement, clean flowing drains, and way less mold, but until mid-october, who knows if it's all gone? We're breathing easier for now.

And the finale? On our last hearing test, Julius' ears were free of fluid and all obstructions, all earwax. His left ear passed, but his right ear failed.

My son is deaf in one ear, and has possibly had limited hearing in the other, and every single Doctor from birth onwards missed it, and never bothered to properly check.

But they never missed a chance to blame me. Proving that nothing ever changes. Nice.

I need to get into a pediatric hospital that can do more advanced testing now, and make sure that he can hear someday, and communicate someday. I don't know just how serious or mild it is. I only know that he has about 10 words, and is getting increasingly frustrated, and is very very far behind. None of the speech therapy we've paid for has worked. And because we've fallen through the cracks, and he wasn't tested properly at birth, I don't know if or when we ever will get into the kind of specialized hospital program that we need.

Characters you will meet on this blog

Mr.Cotta - the loyal and faithful husband who shares my life and tolerates the crazy in our house

Julius - the miracle baby who arrived after years of infertility and loss. He is now 4

Doctors are mentioned usually by pseudonym, but please feel free to email me and ask who they really are in case you are considering consulting with a specialist in the Toronto area. Most of the Docs in this city have had their hands on my personal bits, and I'll gladly share which ones you should be concerned about.

I'll even tell you who the good ones are! 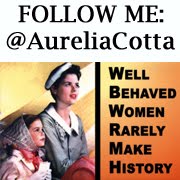 Aurelia
A blog about motherhood, infertility, miscarriage, medical mishaps, mental matters, politics, marriage, and my life. I blog as Aurelia Cotta, the mother of Julius Caesar, because she created the c-section and everyone remembers her son's name instead. I could be your wife, your daughter, your patient, your co-worker, your voter. I could be anyone at all. Email me at aurelia dot cotta at gmail dot com if you need to. (And yes, remove the spaces, etc.)

View my complete profile
All material, including text, writings, photos and any other unique creative material contained herein are protected under copyright, and are not to be copied, reprinted, distributed or otherwise disseminated without the owner's express written permission.